Allende’s life in letters reflects the migrations of her personal life. It was from her Caracas exile that she began, on January 8, 1981, writing a “spiritual letter” to her dying grandfather. This text soon became her debut novel, The House of the Spirits, and that date has become a ceremonial and ritualistic starting point in the creation of all her subsequent works. 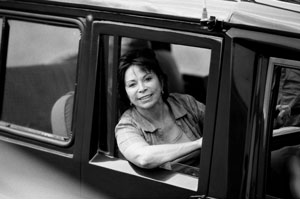 The Wandering Spirits of Isabel Allende

Like many of her fictional characters, Isabel Allende has spent her life traveling to and living in many places. She was born to diplomat parents in Lima in 1942, and when not in her Chilean homeland, lived in Europe, Lebanon, and Bolivia. Following the 1973 overthrow of Salvador Allende, Chile’s president and Isabel’s uncle, she lived in exile in Caracas for thirteen years. Since 1987, when she met and married San Francisco lawyer William Gordon, she has lived and worked in Northern California.

Allende’s life in letters reflects the migrations of her personal life. It was from her Caracas exile that she began, on January 8, 1981, writing a “spiritual letter” to her dying grandfather. This text soon became her debut novel, La casa de los espíritus (The House of the Spirits), and that date has become a ceremonial and ritualistic starting point in the creation of all her subsequent works.

After being rejected by several Spanish-language publishers, The House of the Spirits became an instant best seller when published in Barcelona in 1982. Similar success followed the French and German editions in 1984, and the English translation in 1985. Using a narrative style in which the magical and the real blend together seamlessly, Allende traces the history of her native (although unnamed) Chile through several generations of women, up to the aftermath of the tragic 1973 coup d’etat. It is narrated by the granddaughter of the clan, Alba, who pieces together her family’s past from numerous notebooks written by her grandmother Clara. It is both a family saga and an account of the tragic fate of a country under the tyranny of military rule—where the personal and the historical blend together just as do the magical and the real. The novel is the first of many Allende narratives in which independent-minded women challenge traditional male authority.

Allende’s “magical realist” narrative technique immediately and inevitably led critics to compare The House of the Spirits to that mammoth of Latin American literature, Gabriel Garcia Marquez’s One Hundred Years of Solitude (1970). In one of her earlier interviews, Allende herself addressed this point, noting that Garcia Marquez’s masterpiece had “influenced me as it has influenced almost all the writers of my generation.” This same question would recur frequently in subsequent interviews.

Allende’s novelistic debut was followed by De amor y sombras in 1984 (Of Love and Shadows, 1987), the story of two journalists forced into exile after investigating the case of a young woman who has “disappeared” under military rule. Allende acknowledges without hesitation the novel’s concrete historical and political impetus: “It is based on a political massacre…in Chile…during the military coup…The novel denounces repression and the impunity of murderers…” and gives voice to Chilean public outrage after mass graves were discovered in 1978 outside of Santiago. Unlike her previous novel, Of Love and Shadows foregoes a magical dimension, instead relying on a journalistic tone to denounce a political crime. Although the setting is still Chile, it could have been any of the Latin American countries under military rule that experienced similar tragedies in the 1970s and 1980s.

After setting her first two novels in Chile, Allende shifts to a more tropical landscape in Eva Luna (in Spanish, 1987, and in English, 1988). Eva, the main character, relates her life by means of a text within a text as she creates a television soap opera out of her own picaresque existence. The power of words becomes an important tool of survival with which this illegitimate daughter of an indigenous gardener and a maid forges a new identity for herself. Cuentos de Eva Luna followed in 1989 (The Stories of Eva Luna, 1991), featuring characters that had appeared in the previous novel. Allende’s first venture into the short story genre, The Stories of Eva Luna was written shortly after moving to California, where she found herself in what she calls a “mildly dysfunctional” home environment with multiple distractions, where she could not focus on something as lengthy and demanding as a novel.

Allende returned to the novel form in El plan infinto, which appeared in 1991 (The Infinite Plan, 1993), and makes two major departures from her previous publications: it is set not in Latin America but California, and the protagonist is a man. Based on the life of Allende’s new husband, the Bildungsroman traces the coming of age of Gregory Reeves, a young man raised among Chicanos in the East Los Angeles barrio, and follows him through college in Berkeley, service in Vietnam, and a tumultuous life afterwards. It was received less warmly than her previous works—some critics faulting its “mechanical” tone. But then this was Allende, an author accustomed to writing out of the intimacy of her own personal life, projecting a male Californian world that was doubly outside her own experience. As novelist Jane Smiley speculated in the Boston Globe, Allende had dared to do what few émigré authors had even attempted: to write “from the point of view of the native of the new country.”

In late 1991, while in Madrid to launch the first of her California novels, Allende learned that her only daughter had fallen ill to a rare disease. (She eventually lapsed into a coma from which she never recovered and died a year later). Out of this tragedy emerged Paula (in Spanish, 1994; and in English, 1995), in which Allende is again impelled by an intense emotional need similar to the urgency that characterized her very first writing experience. Paula, like The House of the Spirits, is a letter to a dying loved one that is a poignant memoir of mourning and healing. It reached an even wider audience than her previous works of fiction, also becoming an international bestseller.

Allende marked the end of a period of mourning her daughter’s illness and death with the autumn 1997 publication of the exuberant and warmly received Afrodita: cuentos, recetas y otros afrodisíacos (Aphrodite: A Memoir of the Senses, 1998), a collection of recipes for dishes with aphrodisiac powers, the culinary entries accompanied by historical and literary musings on the twin pleasures of Epicureanism and eroticism. The writing of this book was a healing experience for the author, as Allende explains in the book’s introduction: “I knew that I was reaching the end of a long tunnel of mourning…with a tremendous desire to eat and cuddle once again.”

After almost a decade and two non-fiction works, Allende’s long-awaited return to fiction came in 1999 with a historical drama, Hija de la fortuna, published simultaneously in Spanish and English (Daughter of Fortune). The novel follows the life of Eliza Sommers, the Anglo-Chilean heroine, from her foster parents’ home in Chile through her adventure in search of her lover, who had left for California during the Gold Rush. A review in The New York Times called it a “harmless, happy monster of a book,” noting that, “to the very end, there are plenty of renegade currents threatening to pull the story in different directions. That’s called an abundance of material, and in Allende’s case there’s surely much more waiting in the wings, ready to be moved onstage into her next book.”

And indeed there was more: Retrato en sepia (Portrait in Sepia) appeared in May 2001, and a few months later in English, becoming yet another bestseller. Here Allende weaves together the lives of Clara, one of the main characters from The House of the Spirits, and her cousin Aurora, the narrator of Portrait in Sepia, whose grandmother is a prominent figure in Daughter of Fortune. Allende has thus created a trilogy, each volume of which can be read independently. The novels complement each other so as to encompass a vast narrative “that begins in Chile in 1843, takes its readers to the developing California frontier, returns to Chile during the second half of the nineteenth century, and finishes a century later with the military coup in 1973.”

Ever an adventurous writer, Allende’s most recent work demonstrates her willingness to cross borders into new literary terrain. Her 2002 Ciudad de las bestias (City of the Beasts) moves away from California, deep into the Amazon, and marks her entry into books for adolescents. Its sequel, Reino del dragon de oro (Kingdom of the Golden Dragon), appeared simultaneously in Spanish and English in 2003. Also in 2003 Allende published Mi país inventado: un paseo nostálgico por Chile. The book was issued that same year in English as My Invented Country: A Nostalgic Journey to Chile (2003). Here she links two different national tragedies, both mystically occurring on the same date, September 11, and each greatly impacting her life and the life of her country. The first was the violent 1973 overthrow of a democratically elected government in Chile, her native (yet “invented”) country, and the years of repression that followed; the second, the 2001 attacks on the World Trade Center, which scarred the national psyche of her adoptive country.

Perhaps even more striking than Allende’s skillful passages between genres is her growth into a popular, critically acknowledged novelist. Today she is one of the most recognized voices of contemporary Latin American literature, having earned a place in its pantheon beside Gabriel García Marquez, Carlos Fuentes, Julio Cortázar, and Mario Vargas Llosa, names associated with the “Latin American Boom” of the 1960s and 1970s that preceded Allende.

In sales alone—by 1998 about thirty million copies of Allende’s books in twenty-seven languages had been printed—there is no doubt of her stature as a best-selling author, an achievement that has had both good and ill effects on her literary reputation. The highbrow Encyclopedia of Latin American Literature does not even contain a separate entry under her name, but rather includes her in its “Best-Sellers” article. This article does, however, note that Latin America’s contemporary canonical writers also are bestsellers, which are both critically accepted and commercially successful.

Still, Allende has reached an even broader popular audience than have García Marquez, Fuentes, Cortázar, and Vargas Llosa—and not only in Spanish. Germany is typical:

That is, three of the four top Latin American sellers during this decade in Germany came from Allende’s pen.

Her similar popularity in the United States comes not only from the general public but also from a dedicated North American female readership. When The House of the Spirits appeared, the women’s magazine Vogue serialized some of its chapters. And in early 2000, Allende made an appearance on Oprah Winfrey’s television talk show, where her Daughter of Fortune was announced as the featured title for Oprah’s Book Club. “Within eight hours [of Oprah’s selection], Allende’s novel stands atop the Amazon.com best seller list, and her website…received more than 500,000 hits.” While selection for Oprah’s Book Club may be a dubious distinction in some literary circles, it is worth noting that One Hundred Years of Solitude is itself a current Oprah Book Club selection. Who knows but that Isabel Allende may become one of the principal peacemakers in the old and rancorous war between popular and serious writers?

Not only millions of contemporary readers but also a large number of critics have developed an appreciation for Allende’s literary gift, and for the body of her work as a whole. One critic recently noted:

It is still too early to tell what Isabel Allende’s status in the canons of literature will be…Regardless of the strict and narrow guidelines of some official definitions of art, the legends of Isabel Allende have moved readers of Latin American literature in ways that few other authors have.